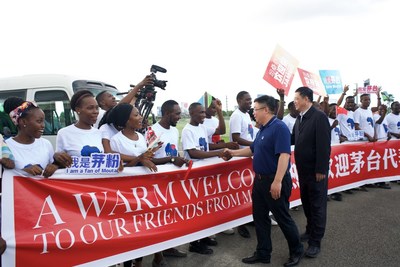 This is another one of Moutai’s promotional campaigns targeting the African continent, less than two years following a similar effort in South Africa in November 2017.

As one of China’s emblematic national brands, Moutai has sped up its international expansion, the success of which, exemplified by the growth in the number of fans of the Chinese alcoholic beverage worldwide, is a strong testament to the liquor maker’s significantly enhanced global presence. Upon arriving at the Dar es Salaam Julius Nyerere International Airport on a bright sunny day, the delegation was surrounded by an enthusiastic crowd of East African Moutai fans, who were dressed in T-shirts featuring the Moutai logo superimposed on an outline of the Africa continent and holding up banners and flags emblazoned with the words “Welcome to the Moutai Delegation”.

The fans expressed their welcome and excitement when they shouted out wo ai moutai (“We love Moutai”), in their best efforts at pronouncing the Chinese words, and sang songs featuring East African rhythms, collectively showing the emotional attachment they had made with the brand. Messrs. Wang and Yang warmly shook hands with the enthusiastic fans, in addition to joining them in singing the songs and posing for a group photo. The thrilled fans attracted the attention of the throngs of passengers just disembarking or waiting for flights at the airport.

Africa is an integral part of Moutai’s international expansion. The Chinese liquor maker plans to focus on East African countries, notably Tanzania, Kenya and Ethiopia, during this campaign, executing on its plan to hold a large-scale brand promotion conference in Dar es Salaam.

The delegation will host a series of events, including a large cultural gathering, several small tasting sessions as well as visits to Chinese embassies in several countries, during the subsequent two weeks, in a move to raise the maker’s visibility across East Africa. At the same time, the delegation will also engage in a comprehensive market research initiative and hold the resident reseller symposium, in order to gain an in-depth understanding of the trends in the East African market, and to use the knowledge gained as the basis for establishing the firm’s strategy and roadmap for global expansion.