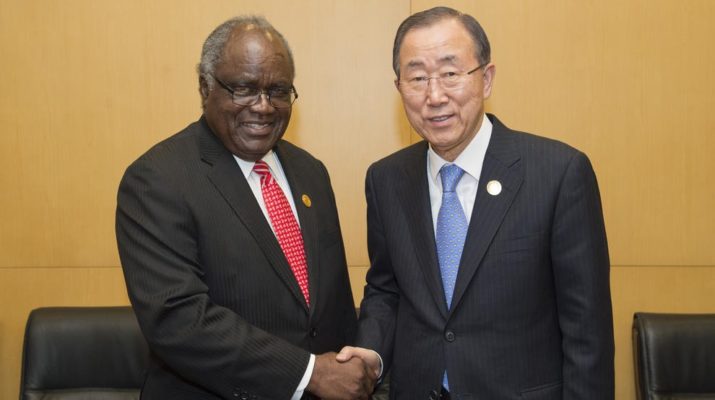 30 January 2015 – Addressing the African Union (AU) Summit in Addis Ababa, Ethiopia, at the start of what he called a “crucial year for global action to secure our global future,” the United Nations Secretary-General today said he looked forward to African countries realizing their massive cultural, human and economic potential.
“African countries have been the backbone and leading Member States of the United Nations since the day they achieved independence,” Mr. Ban said, noting their growth in numbers from four States in 1945 to 54 in 2015. “In this critical year, we need Africa to help guide the way to a world of sustainability and dignity for all the people, where nobody will be left behind.”
Throughout his speech, the Secretary-General stressed the centrality of Africa to the UN’s work and promised that the UN would stand with Africa as a partner and the “strongest supporter” of the continent’s efforts to achieve peace and security and all aspects of sustainable development.
The President of the General Assembly, Sam Kutesa, also spotlighted the importance of the year ahead and specifically, his selection of the theme ‘Delivering on and Implementing a Transformative Post-2015 Development Agenda’ for his Presidency of the 69th Session.
Having launched the negotiating process for the successor framework to the Millennium Development Goals (MDGs), Mr. Kutesa said the post-2015 agenda’ overarching objective would be poverty eradication. Adequate means of implementation – such as financing and technology development and transfer – and mobilisation of resources at the national level, through public and private channels, by attracting more foreign direct investment and by strengthening global partnerships, would be essential and he said he would convene a High-level Thematic Debate on “Means of Implementation for a Transformative Post-2015 Development Agenda” in New York on 9-10 February this year.
The Secretary-General pointed to gains already made thanks to the MDGs and looked forward to adoption of the post-2015 development agenda, including a set of sustainable development targets, and to a meaningful, universal climate change agreement in Paris in December.
“No continent has more at stake in these negotiations than Africa,” he stressed, underlining the importance of the Financing for Development Conference in Addis Ababa in July. “Without resources, our commitments to sustainable development will amount to little more than fine words on paper.”
Fulfilling the aspirations and wishes of the continent’s people required leaders to listen to their people.
“People around the world have expressed their concern about leaders who refuse to leave office when their terms end,” he said. “I share those concerns. Undemocratic constitutional changes and legal loopholes should never be used to cling to power.”

Secretary-General Ban Ki-moon in a group photo with participants of the 24th Ordinary Session of the Assembly of the African Union. UN Photo/Eskinder Debebe

Secretary-General Ban Ki-moon meets with Senior Advisors before the start of opening of the 24th Ordinary Session of the Assembly of the African Union. UN Photo/Eskinder Debebe

USA is Pulling Military from the Ebola Fight

Presentation of Memoir on 50 Years of Independence in Equatorial Guinea

January 11, 2019 admin Comments Off on Presentation of Memoir on 50 Years of Independence in Equatorial Guinea