Cameron went on Sanya Serenity Coast and sailed with the crew members. During the sailing, the ambassadors of Sanya explained their sailing experiences of Leg 1 and Leg 2, and also introduced Sanya city to Cameron.

Sanya is a tropical city in the southernmost point of China which is similar to Cape town. It is China’s sole international seaside vacation destination. Sanya is where the Li, Miao, Hui and Han nationalities live together. In particular, the Li Nationality is unique to Hainan province which is the province Sanya belongs to. More than 3000 years ago, the ancestors of the nationality sailed across the Qiongzhou Strait and settled on the island, where they continued to develop what became their unique and distinct culture.

Several Chinese historical figures chose Sanya as the place to promote a certain aspect of Chinese culture, and each left a footprint of their efforts. The most famous among them is Tang Dynasty monk Jian Zhen who failed five times in his attempts to reach Japan in sailing vessels and promote Buddhism there. On his fifth try, the sailing ship drifted ashore at Nanshan, in Sanya, where he decided to stay. He subsequently built temples and Buddha statues there. 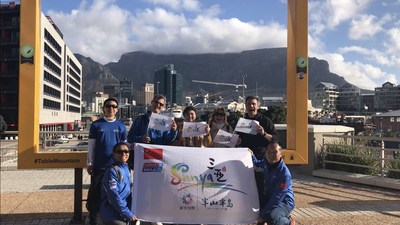 Sanya’s cuisine also embodies diversity. Hainan province is known for the wide variety of local delicacies, and not just the many delicious seafood dishes. One iconic dish is Hainanese Chicken Rice. Sanya brings together the specialties of the entire province, offering a feast for the taste buds of food lovers everywhere.

After the introduction, Cameron was attracted by the culture, climate, and the food. He hope one day he can be in Sanya city.

In addition, the ambassadors of Sanya and the representatives of Sanya city committee organized several promotions for Sanya city among the tourists and citizens in Cape town. People getting to know about a place which they are not familiar with and are curious about the city which is similar to Cape town.

The stopover of Sanya Serenity Coast at Cape town gives the opportunity for Sanya city to meet South Africa no matter to superstars or normal people.

July 12, 2018 admin Comments Off on MSL opens office in Turkey

AGI: A WINDOW ON THE ARAB WORLD WITH THE NEW DIALOGUE REVIEW

May 19, 2015 admin Comments Off on AGI: A WINDOW ON THE ARAB WORLD WITH THE NEW DIALOGUE REVIEW

April 17, 2019 admin Comments Off on SANY’s business performance of 2018 hits the best record in history