On 17th July, the Prime Minister of the Government, Francisco Pascual Obama Asue, held a meeting with Service delegates, Government delegates, the mayor of Bata, heads of the urban districts, and the Deputy Director for Security, which was held at the Ngolo Palace of Conferences.

This information meeting served as an opportunity for Obama Asue to invite those present to form part of the programme called Shock Plan, involving the cleaning and conditioning that involves both members of the Government and residents from the various neighbourhoods making up the city of Bata, which will begin on 19th July. The matter was previously covered at eh Interministerial Council meeting of 17th.

In this vein, the Government member expressed his indignation with companies that provide cleaning services in the Litoral capital due to the presence of rubbish and the lack of maintenance seen in various areas of the city of Bata.

During the meeting, which was attended by the ministers for the Interior and local Corporations, and Public Works, Housing and Town Planning, Obama Asue encouraged those present to contribute towards increasing income to the State coffers, as the amounts deposited in the Continental Region do not match those expected, with respect to the activities and services which take place there.

Another of the matters covered was that of punctuality and presence in the position, taking into account that the working day of a State civil servant is eight hours, from eight in the morning to four in the afternoon. Along the same lines, Obama Asue called on Service delegates to inject more dynamism into the handling of papers deposited. 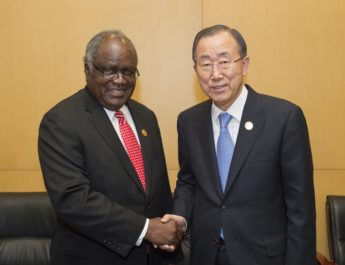 February 17, 2020 admin Comments Off on Activities of presidential couple