– Over 2,000 tons of relief aid so far moved by DRT team at Tribhuvan Kathmandu International Airport for further distribution to those in need

KATHMANDU, Nepal, May 15, 2015 / PRNewswire — Deutsche Post DHL (DPDHL) Group’s Disaster Response Team (DRT) will extend its deployment till May. The extension comes after another heavy earthquake hit the region on 12 May and causing additional devastation to the area. The DRT will continue to play a critical role in ensuring the Tribhuvan Kathmandu International Airport remains operational. The DRT was deployed less than 48 hours after the first earthquake struck on 25 April. As the country’s only international airport in a landlocked country, the airport is the main gateway for the international aid community to send relief goods into Nepal.

The 18-strong team of volunteers from DHL, all logistics experts and trained in disaster management, were deployed in three waves and tasked with improving logistics operations at Tribhuvan Kathmandu International Airport for incoming relief supplies. Over the last three weeks, the DRT handled over 2,000 tons of incoming relief supplies, sorting and moving goods with limited equipment into centralized airside warehouses run by the United Nations World Food Programme for further distribution by international non-governmental organizations (NGOs).

The airport has one runway servicing both passenger and cargo aircraft, and can process nine planes at a time, with a 196 ton cargo weight restriction per plane. The airport’s capacity, coupled with a current lack of equipment and resources in the currently very demanding situation, are huge factors impacting the speed of delivery of relief goods to those in need.

Chris Weeks, Director for Humanitarian Affairs, DPDHL Group, said, “We are faced with recurring strong earthquakes – this indicates that relief efforts will have to continue for quite some time. The Disaster Response Team takes care of a crucial part in the relief effort chain. When we first arrived, we had a big job to do in cleaning up the congested tarmac area which was filled with relief supplies – this is critical in an emergency situation. If we hadn’t done this, it’s likely the airport would have closed within the first 48 hours of the earthquake because the airport would have run out of space and equipment, and NGOs would have been unable to locate their aid and relief goods. We implemented a system to maximize the use of limited resources for ongoing relief efforts. Working closely with the civil aviation authorities, local military, international aid organizations and the UN, we have clarity on the daily flights coming in. We also set up processes to meet the cargo at the airside to make the necessary arrangements in the fastest possible time.”

“With the recurring earthquakes experienced in Nepal, we are glad to have the logistics expertise of DHL on the ground at the Nepal airport to help with the mammoth task of managing the deluge of incoming relief aid. It is a tough and thankless job but an extremely critical one, as Nepal relies on the continued operations of its airport to receive aid from the international community. The speed and dedication of the DPDHL Group’s DRT is truly commendable,” said Alex Marianelli, Senior Logistics Coordinator, Nepal Earthquake Response, World Food Programme.

DRT, which can only be activated by a request from the United Nations Office for the Coordination of Humanitarian Affairs (UNOCHA), worked closely with the Nepalese authorities, the United Nations World Food Programme (WFP), numerous governments, aid agencies and NGOs. The team used any available resources they had – from locally borrowed forklifts, tractors and makeshift dollies, to UK-donated K Loaders to speed up the logistics operations, ensuring that relief goods are delivered through vertical take-off US Osprey airplanes and even local tractors.

Fast unloading at the small airport and expert warehousing has been key to keeping the airport open and ensuring the right equipment get to the appropriate relief agencies as fast as possible. For nearly three weeks, DRT has been involved in coordinating the arrival and distribution of food, shelter, medicines and water including over three million high-energy biscuits from the United States of America’s Department of Agriculture, a 35-ton inflatable hospital from Medecin sans Frontieres, solar lamps, tools for rebuilding and plastic sheeting. The team also managed one chartered DHL plane carrying goods donated by sponsors from the Middle East.

Gagan Mukhia, Country Manager, DHL Express Nepal, said, “The generosity of people can literally be overwhelming in an emergency such as this and aid comes in many sizes and forms. Some of the huge air cargo pallets initially had to be dismantled before we could move them because there just wasn’t the equipment to unload them as a whole. With the latest earthquake on 12 May, we are still able to continue with our DRT operations as we now have the equipment and systems in place to deal with the ongoing relief effort that Nepal will desperately need for many months ahead. Planes can now be unloaded quickly and aid distributed more efficiently to the Nepalese community.”

In addition to the ongoing voluntary work of the Disaster Response Team, DHL’s Aid and Relief commercial service has moved over 100 tonnes of relief goods for organizations like ShelterBox and Norwegian Church Aid. Additionally, bookings for over 90 tonnes have already been received for the coming weeks.

The DPDHL Group DRT comprises highly-trained volunteers who provide logistics expertise free-of-charge to help coordinate relief aid at the airport for further distribution to the victims in the speediest manner possible. The DRT network consists over 400 trained DHL volunteers, who can be deployed within 72 hours. Since 2005, the DRTs have been deployed over 30 times worldwide, with recent deployments including Vanuatu following the destruction caused by Cyclone Pam in March 2015 and the Philippines following Typhoon Haiyan.

GoHelp is the disaster management program of DPDHL Group and comprises the “Get Airports Ready for Disaster” (GARD) program and natural disaster response via the DRTs. In a partnership with the United Nations since 2005, DPDHL Group provides the UN with access to its core competence in logistics, its global network and the know-how of its employees free-of-charge. To date, GARD has been implemented jointly with the United Nations Development Program to more than 29 local airports in countries like Armenia, Bangladesh, Dominican Republic, El Salvador, Indonesia, Jordan, Lebanon, Nepal, Panama, Peru, the Philippines, Turkey and Sri Lanka. In cooperation with UNOCHA, DPDHL Group also established a global network of DRTs to support airports in the event of a natural disaster.

Deutsche Post DHL Group is the world’s leading logistics and mail communications company. The Group is focused on being the first choice for customers, employees and investors in its core business areas worldwide. It makes a positive contribution to the world by connecting people and enabling global trade while being committed to responsible business practices and corporate citizenship. Deutsche Post DHL Group operates under two brands: Deutsche Post is Europe’s leading postal service provider. DHL is uniquely positioned in the world’s growth markets, with a comprehensive range of international express, freight transportation, eCommerce, and supply chain management services. Deutsche Post DHL Group employs more than 480,000 employees in over 220 countries and territories worldwide. The Group generated revenues of more than 56 billion Euros in 2014.

DHL – The logistics company for the world. 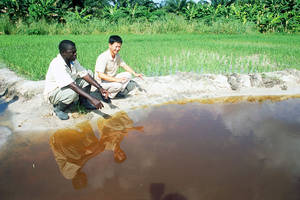